MUNCHKIN 4: THE NEED FOR STEED 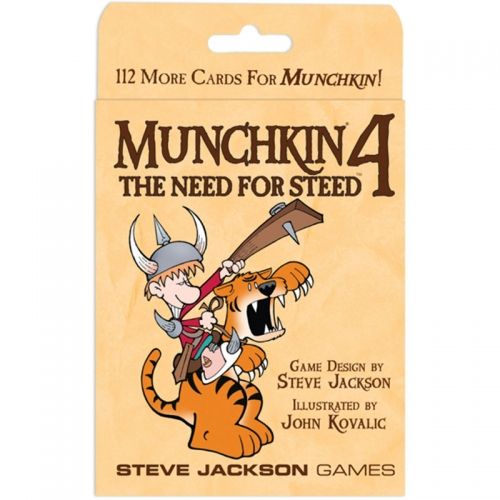 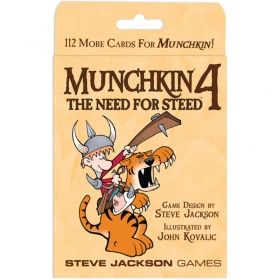 Munchkin 4: The Need for Steed is the latest expansion for the original Munchkin - 112 more John Kovalic-illustrated cards for killing monsters, stealing treasure, and backstabbing your fellow players. This set introduces Steeds, the trusty mounts of legend... Oh, wait - this is Munchkin! So these Steeds include not just the Dragon and the Tiger, but the Giant Mutant Gerbil (drawn by guest artist Shaenon K. Garrity of Narbonic), the Chicken, and Big Joe, who might be a Steed or might be a Hireling. It's hard to tell.

Hireling? Yes indeed, The Need for Steed has lots and lots of Hirelings, who look quite a bit like Sidekicks from Super Munchkin, or Minions from Munchkin Bites! Add these valuable characters to your retinue, use their special abilities, and sacrifice them without a thought to save your own skin! Or, better yet, kill somebody else's Hireling. That's the way a Munchkin does it!

Feel the need... The Need for Steed