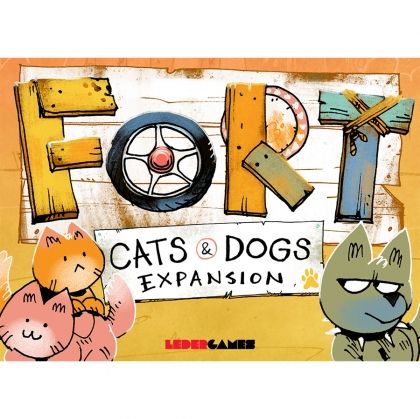 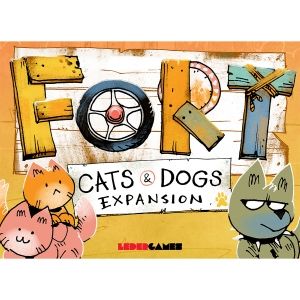 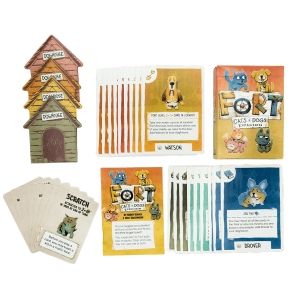 Fort is a 2-4 player card game about building forts and following friends.

In Fort, you're a kid! And like many kids, you want to grow your circle of friends, collect pizza and toys, and build the coolest fort.

By doing this cool stuff, you'll score victory points, and at the end of the game, the player with the most victory points wins! Your cards not only let you take actions on your own turn, but also let you follow the other players' actions on their turns. Will you devote yourself to your own posse, or copy what the other kids are doing?

But be careful as your carefully constructed deck might start losing cards if you don't actually use them. After all, if you don't play with your friends, why should they hang out with you anymore?

You've begged and pleaded with your parents and finally...it's time to get a pet!

Fort: Cats & Dogs Expansion adds two modules to the Fort base game: dogs and cats. You can use one or both, as desired.

Dogs are loyal. If you play one, it will (usually) go stay in your doghouse, but they're fussy, so you can play a dog only if you meet its needs. Neglect a dog, and it'll wander off. At game end, whoever has the most dogs in their doghouse scores seven points!

Cats are fickle. Their actions happen at specific times, and they move around a lot. Cats will be attracted to a different player if their yard has cards of specific suits, even if the cat's current owner has them, too. The more cats you have at the end of the game, though, the more points you score.