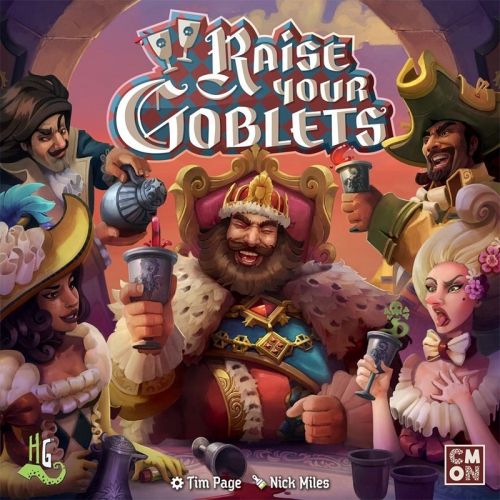 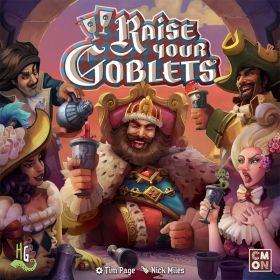 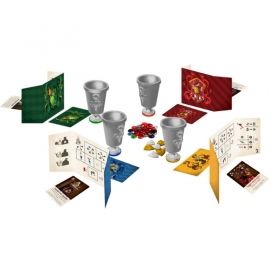 Have you felt the thrill of the struggle between life and death, sitting at the same table with your worst enemy and an unreasonable amount of poison? Don’t forget to bring some antidote when playing Raise Your Goblets!

In Raise Your Goblets, players take the roles of nobles at a banquet, each one with their own agenda of personal vendetta. Each player has wine, poison and antidote tokens they can pour into the goblets, trying to poison their enemies while staying alive themselves! Each noble also has a special ability that allows them to bend or even break a rule.

In more detail, each character has a plastic goblet, and each goblet is primed in secret at the start of the round with either wine, poison or antidote. On a turn, you take two actions, with actions being to peek inside your goblet, rotate all goblets left or right, swap your goblet with someone else's, or secretly add one of your wine, poison or antidote tokens to any goblet. Once someone has "served" all of their wine, they can call a toast on their turn instead of doing anything else. Each player, including the toaster, takes one more action, then everyone drinks. If you have more poison than antidote, you die.

What's your goal in doing all of this? Well, at the start of a round you are given a target to kill, and everyone knows who is targeting whom. If at the end of a round, your target is dead, you score 1 point; if you're alive, you score 1 point; if both of these things are true, you score a bonus point (3 total). Also, whoever has the most wine in their cup scores 1 point. If someone has died, they receive a new noble card, and at the end of three rounds, whoever has scored the most points wins.