• 1  box that doubles as the game board

Ghooost! is a fast, easy-to-learn card game with a Halloween-based theme and lots of twists and turns! Play your cards wisely to get rid of all the ghosts, undead, vampires, zombies and other spooky creatures haunting your mansion. Block your opponents while they're trying to drive spirits out of their home and into your backyard – but beware as the scariest ghosts will not be driven away so easily...

In game terms, your goal in Ghooost! is to get rid of all of your cards in hand and in your mansion by playing a card (or several matching cards) equal to or higher than the one(s) played previously. To set up, each player has four ghost cards in hand and 4-12 cards in his mansion. Ghost cards come in four suits and have values ranging from 1 to 14, with a few cards having special powers; scary (red) ghosts, for example, can be topped only by fearless ghosts, other scary ghosts, or a ghost quartet, while fearless ghosts can be played no matter what's on top of the Cemetery (discard pile).

A game consists of two stages. In the first stage, players draw or play cards to prepare their hand of cards for the second stage. On a turn, a player takes one of three actions:

Once the Crypt is empty, the second stage begins and players take turns either playing valid cards into the Cemetery or taking all cards from the Cemetery into their hand. If a player plays two or three matching ghosts, he takes another turn immediately; if he plays four cards that match (or plays cards that complete a quartet), those cards and the Cemetery are removed from play, then he takes another turn. If a player's hand is empty, he draws the top card from his mansion, playing it if valid and taking all the Cemetery cards into his hand if not. If a player empties his hand and mansion, he's out and the others keep playing. Play continues until only one player has cards in hand; this player loses the game and everyone else wins.

Ghooost! includes a scoring system that allows for multiple rounds. 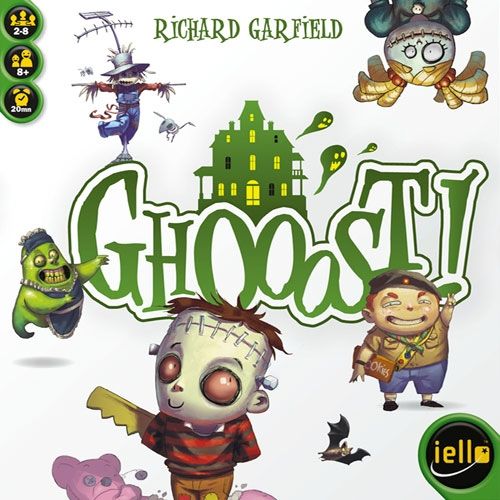 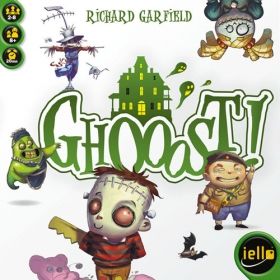