CADWALLON: CITY OF THIEVES - THE KING OF ASHES EXP

ИНФОРМАЦИЯ ЗА ИГРАТА:
Thunder splits the sky as dark clouds gather above the free city of Cadwallon. The ground trembles, towers sway, and an earthquake of unprecedented violence wracks the City of Thieves! In the midst of the crisis, as bystanders flee the filthy streets, an entrance opens to a series of long-forgotten catacombs.
The guild intrigues of Cadwallon: City of Thieves grow even richer with the treasure trove of new adventures, characters, equipment, and Arcana in The King of Ashes expansion!
Rumors claim the newly-opened catacombs contain the legendary treasure of Sophet Drahas, and the thieves of the city above race to find the entrance to these long-hidden catacombs and grab their riches. The King of Ashes explores these catacombs with a new board and six adventures that can be played independently or combined into a larger campaign.
Revised rules make the militia a more imposing force, and rules for experience, equipment, and mercenaries afford tremendous strategic options in your games, especially when you play them as part of a larger campaign. 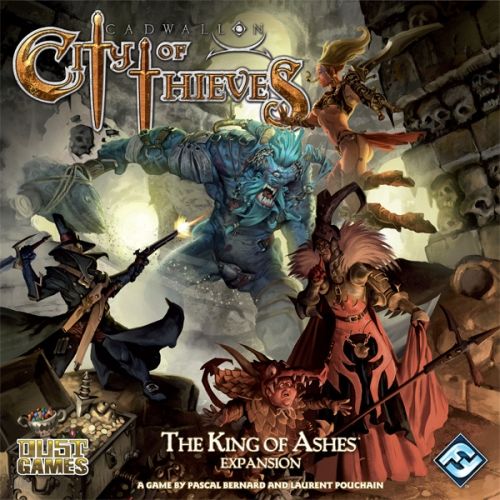 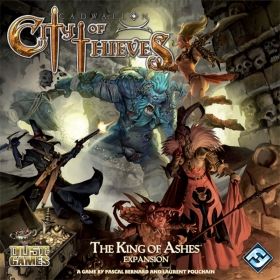 Thunder splits the sky as dark clouds gather above the free city of Cadwallon. The ground trembles, towers sway, and an earthquake of unprecedented violence wracks the City of Thieves! In the midst of the crisis, as bystanders flee the filthy streets, an entrance opens to a series of long-forgotten catacombs. Rumors claim the tunnels hold the legendary treasure of Sophet Drahas – The King of Ashes! Now the thieves race to seize these riches even if it means descending into hell!
Legendary Treasures and a Gruesome Guardian
As you seek to outmaneuver rival guilds, you’ll find many new challenges in the catacombs beneath Cadwallon. Rumored to house the legendary riches of the King of Ashes, these rooms and passageways have piqued the interest of all Cadwallon’s guilds.
The King of Ashes expansion introduces new strategic considerations to the game with its exploration tokens. During set-up, players randomly place exploration tokens alongside the chest tiles in all the district’s rooms, but unlike the chest tokens, these remain facedown until a thief explores them. Exploration tokens represent the many secrets hidden in the shadows of Cadwallon, including staircases that can lead to the newly-exposed catacombs beneath the city!
Thieves who make their way into the catacombs may grow wealthy faster than even they could have imagined, or they may meet their doom. The catacombs feature eight rooms and chambers, and you can bet the guilds will be in a hurry to learn how best to turn a profit from their unique abilities. Players exploring the catacombs may find secret paths to freedom, draw Arcana, or steal ducats from their rivals. However, they also risk a confrontation with the monstrous Cyclops of Mid-Nor!
Talent for Hire
The guilds of Cadwallon aren’t the only individuals interested in the rumors of newfound wealth. King of Ashes allows players to hire the services of talented mercenaries, unique characters who can focus your treasure-hunting with their special talents. Each guild gains the services of one allied mercenary while Sienne and Isabeau offer their services to the highest bidder.
Having lived and worked a long time outside the guilds, mercenaries possess different arrays of combat, movement, and mind values. Thus, each sacrifices some of the strengths upon which you may have previously relied in order to focus your pursuit of riches in one specific direction.
Whether you wish to race quickly throughout the district in search of the choicest gems, pick locks with ease, or instill fear in your rivals by hiring a warrior with a fearsome reputation, mercenaries greatly increase your ability to specialize your strategy!
Experience Breeds Success
The six new adventures in King of Ashes can be played independently, just like in the base game, or they can be linked to form a larger campaign! Accordingly, King of Ashes introduces exciting rules for equipment and experience that savvy guilds will use to their advantage.
Guilds gain experience during rumbles with their rivals and can use their experience to reduce the chances of ill fortune with later dice rolls or to equip their members with new gear. King of Ashes presents a wide array of tools and weaponry that can help you gain an edge in the streets of Cadwallon.
A Thief’s Job is Never Done
While Cadwallon trembles in the aftermath of a shocking earthquake, gangs of thieves ready themselves for new exploration, thinking only of the legendary riches of Sophet Drahas… and rightly so!
With four new adventures, four new mercenaries, the monstrous Cyclops of Mid-Nor, and dozens of new Arcana, equipment, and intrigue cards, King of Ashes greatly enriches your games of Cadwallon: City of Thieves.
*text from the publisher's web site