CALL OF CTHULHU: SEEKERS OF THE KNOWLEDGE - Expansion 3

Seekers of Knowledge, the third deluxe expansion for Call of Cthulhu: The Card Game, populates the hallowed halls of Miskatonic University with nineteen different characters committed to the merits of higher education, the application of science, and a little dabbling in stranger and darker knowledge.
The host of new Miskatonic characters provides the faction dynamic new life in Call of Cthulhu: The Card Game. Many of the characters work well together, gaining greater efficiency the more of their allies enter play. Other cards provide Miskatonic University players reasons to focus solely upon the heroic investigators, rather than pairing them up with another faction and compromising their ideals. Altogether, Seekers of Knowledge looks to sound the bell upon a brand new school year full of optimism.
Finally, Seekers of Knowledge is more than another deluxe expansion; it's the first in a new release model for Call of Cthulhu: The Card Game. The game will shift away from monthly Asylum Packs to the release of a deluxe expansion (each with 165 cards, three copies each of fifty-five individual cards) once every four months. 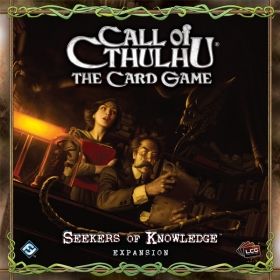 Of our studies it is impossible to speak, since they held so slight a connexion with anything of the world as living men conceive it. They were of that vaster and more appalling universe of dim entity and consciousness which lies deeper than matter, time, and space, and whose existence we suspect only in certain forms of sleep—those rare dreams beyond dreams which come never to common men, and but once or twice in the lifetime of imaginative men.