In Barony, players are ambitious barons trying to extend their dominion over the land! Who will succeed and become the new king?

At the beginning of the game, players create the board at random with nine tiles per player; each tile is comprised of three hexagons, with each hexagon being one of five landscape types: forest, plains, field, mountain, lake. Players then each place three cities on the game board, with a knight in each city. They then take turns in clockwise order, with each player taking exactly one action from the six possible actions:

Once any player has gained the title of duke, finish the round, then tally the VPs, with players scoring for resources still in their possession, their rank in the game, and the number of cities they built. Whoever has the most VPs wins. 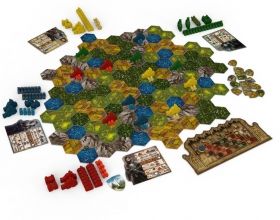 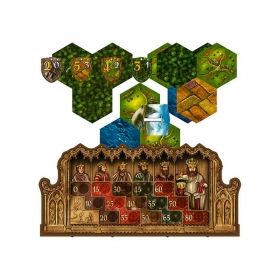