STAR WARS EDGE OF THE EMPIRE - SUNS OF FORTUNE

Fast Ships, Fast Pilots, and Fortunes to Be Made

Suns of Fortune is your ticket to a Core World full of action, adventure, and opportunity. Known as the home of fast ships and the daredevils who pilot them, Corellia has long maintained a reputation as the birthplace of the most talented smugglers, scoundrels, and jockeys ever to fly a snubfighter or ride a tricked-out swoop.

While this reputation may be slightly—but only slightly—exaggerated, Corellia is nonetheless bursting with opportunities for excitement and adventure. Despite being located among the ancient worlds and civilizations of the galactic Core, Corellia is neither stuffy nor overly constrained with laws and regulations. Instead, its spirit of adventure thrives, drawing thrill-seekers from all over the galaxy.

Moreover, throughout the 144 pages of Suns of Fortune, GMs will find extensive details on the Corellian Sector that can help establish a rich and vibrant setting for their Edge of the Empire campaigns. Give your players the chance to win it big on Treasure Ship Row, make a fortune smuggling to Selonia, purchase one of Nubia’s amazing ships, or even pull off the art heist of the century on Aurea. The Corellion Sector is full of opportunities for your heroes to prove themselves.

You’ll also find nine modular encounters, each of which can either serve as part of nearly any adventure. These are the kinds of scenes and challenges that can crop up almost at any time, while you’re trying your hand at a game of Sabacc or stopping for a drink at the local cantina. Players may even trigger them with the specific choices they make, and they give the GM an effective response to an unplanned turn of events. 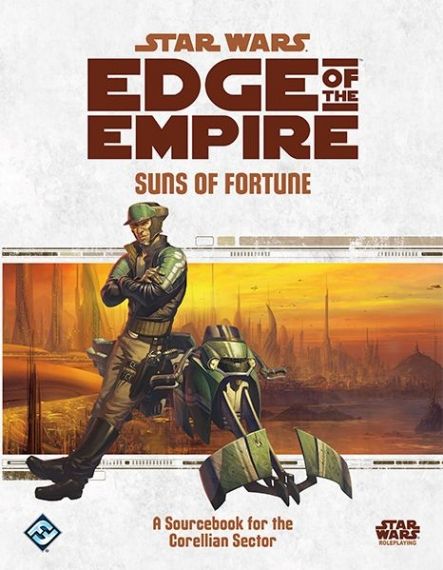 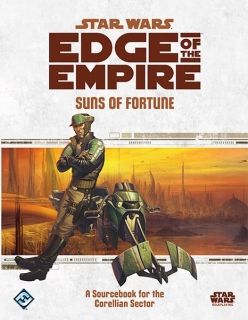