Fantasy Flight Games is proud to announce our newest card game, Penny Arcade! Set in the world of your favorite web-comic, Penny Arcade puts you in the middle of the epic battles between Tycho and Gabe. Unleash attacks at your rival, such as Mein Leapen or the (Cardboard) Tube Strike. Put your Hijinks to good use, employing your beard-growing abilities with Oneupsmanship or the powers of Skullduggery. Collect Stuff, and acquire the Rare Card or your ally in the tub Sir Quacks-a-lot. Hidden in each deck is also the awe-inspiring powers of the Watch, and it is sure to trade hands quite often as abuse is heaped on the head of whoever holds it.

Each deck features the feel of the characters. Gabe’s sees him hiding behind the couch and using his apathy as the ultimate defense. Tycho summons forth his Vast Intellect to overwhelm the boy wonder, and loves nothing more than the feel of a natural 20 with Critical Strike.

Designed by James Hata, Penny Arcade is a brand new experience. Each turn, you will have to employ your strength and intelligence to best effect to smash the face of your foe. Tycho, being the smarter of the two, can bring to bear many different Hijinks to ensure his victory. Using combinations of Attacks and Hijinks, Tycho can set up the perfect Really Big Word Attack. While not the brainy side of things, Gabe can serve up heaping helpings of pain with his brute strength.

For fans and newcomers alike, Penny Arcade is a fun, fast-paced card game for two players. Though only one can walk away the victor, both sides will be itching for another go.

Penny Arcade is a card game for two players featuring the characters from the hit web comic of the same name. Gabe and Tycho employ various attacks, hijinks, and stuff they have acquired over the years to assist them in beating down their rival. Playable in less than 30 minutes, Penny Arcade is easy to learn and impossible to master. 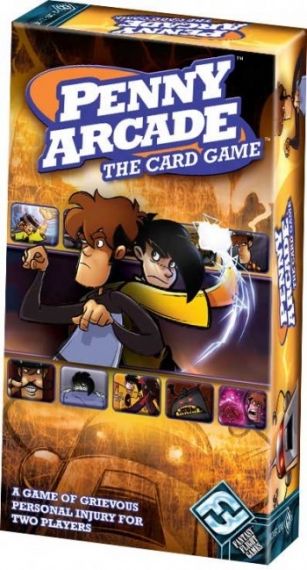 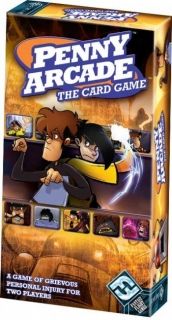 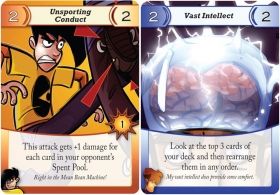