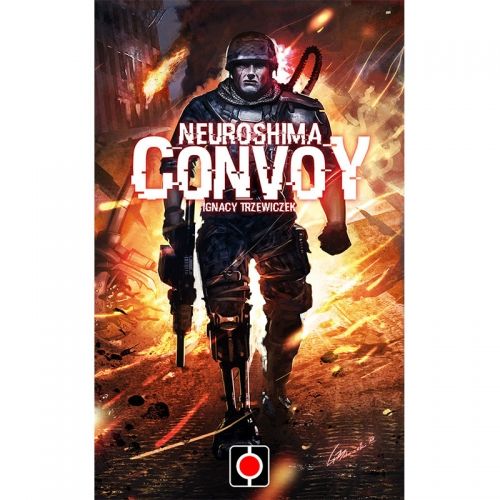 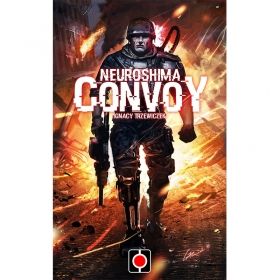 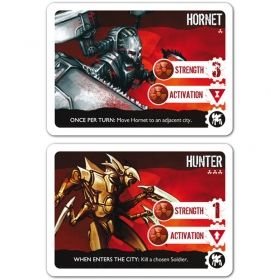 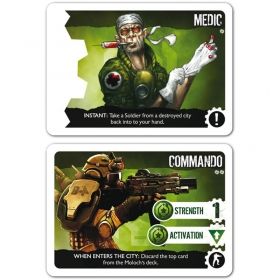 Moloch forces are heading toward New York to raze the city. This will end the resistance of the people and eventually break their defense lines. A swarm of steel-gray machines marches to the east, destroying everything in its path. Day after day, the horizon is decorated with new pillars of smoke. Fire will soon visit the place that used to be called New York.

Unless soldiers from the Outpost army can stop this convoy of machines. The fate of New York is in their hands. Can they destroy all the Moloch machines before they reach the city? Can they slow down the convoy in a series of ambushes and small battles? They have to...

Neuroshima: Convoy, first published as The Convoy, is an asymmetric two-player card game set in the post-apocalyptic world of Neuroshima. One player commands the convoy of powerful robots, and his goal is to reach New York and turn it into ashes. The player has a deck of 35 cards: robots of Moloch (such as the Gauss Cannon, Clown, or Juggernaut), modules to attach to the robots (Network module, Kasparov module), and special cards (such as Push back, or Move). He plays those cards in the cities he passes while moving toward NY, trying to turn human settlements into dust while preparing for the final battle.

The other player commands the Outpost troops, attacking the convoy and trying to slow it down. The Outpost deck also contains 35 cards: soldiers (such as Runner or HG), buildings (such as Bunker or EMP Cannon), and many special cards (Move, Retreat, Medic). The Outpost has to win a few battles, slow down the march of Moloch as much as possible, and prepare to welcome robots in New York City.