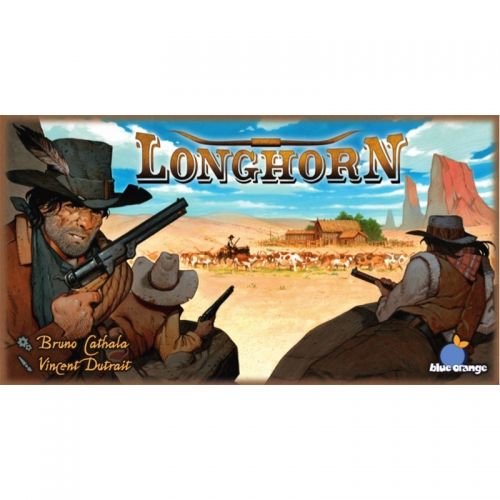 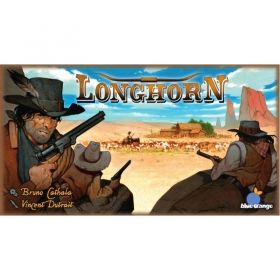 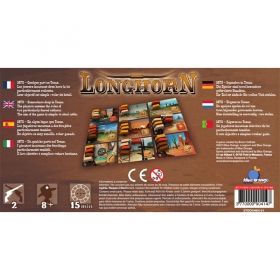 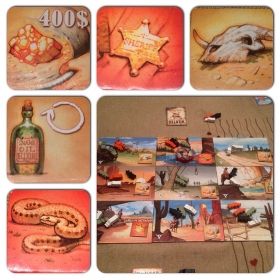 1870 – Somewhere deep in Texas, the rearing of Longhorn cattle from northern Mexico is booming. It has now become a major source of income for the Texan farmers, while at the same time attracting cattle thieves of all kinds.

In Longhorn, the players assume the roles of two particularly feared outlaws: Eagle Perkins and Jessie Artist Byrd. The aim of the game is simple: to steal cattle (and a few gold nuggets, if possible) to see who can amass the most money by the end of the game — or who can get his opponent arrested by the sheriff!

The game is set up by shuffling the 9 locations and setting them up in a 3x3 grid, selecting 9 tokens randomly and assigning one to each location (if the sheriff token is in play, it must be placed on Nugget Hill), and finally randomly distributing the coloured longhorn cattle meeples to each location, with the number required being shown on each location. The start player then chooses a location with 4 cattle and places the player piece in it.

The game ends in one of three ways: - If a player takes the sheriff token, they lose immediately - If a player takes all 9 cattle of any one colour, they win immediately (if they did both in the same turn, they lose) - If no legal move can be made, the players score; gold nugget tokens are worth their face value and each colour of longhorn is worth $100 for each cow of the same colour still on the board. For example, if the Perkins player has 4 black cattle and 5 are left on the board, each of his 4 black longhorns are worth $500. If there are no black cattle (because the Byrd player has them, or through drought) then they are worth nothing. The player with the highet total wins.

On a players turn, they choose a colour of longhorn present in their location and steal all of that colour. For each longhorn stolen, the player moves the player piece that many spaces and then flips it, to signify that it is now the other player's turn.

If a location is cleared of longhorn cattle, the player who took the last longhorn must take the token present and activate it. Some are positive and some are negative. Once a space is cleared, it can not be moved to in a future turn, though it can be moved through.