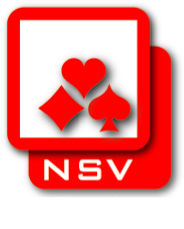 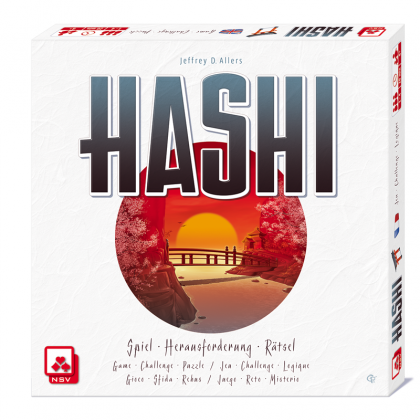 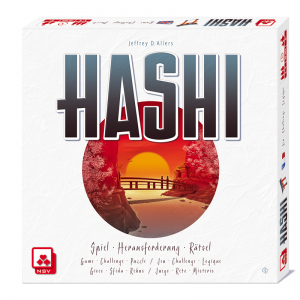 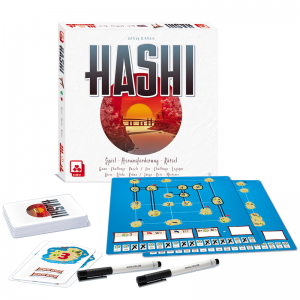 Hashi uses the concept behind the Hashiwokakero logic puzzles (a.k.a. Hashi or Bridges) of connecting islands with bridges, but is a competitive game in which you try to "complete" as many islands as possible.

To set up, all players decide on which side of the board to use; each side shows 18 islands: 4 with a red flag and 3 with a blue flag, with all others having no flags. Write a 3 or 4 on a non-flagged island, then give this board to the player on your left. Remove one of the 18 number cards from the shuffled deck without revealing it.

On a turn, reveal a card, which will show a numeral (1-6) and a number of bridges. Write the numeral on an island that doesn't yet have a numeral, writing on a flagged island only if it has at least one bridge connected to it. Then draw the number of bridges on the card from numbered islands to orthogonally adjacent islands, noting that:

- At most two bridges can connect orthogonally adjacent islands.

- The number of bridges connected to an island cannot exceed the numeral on that island.

You can skip one or both parts of this card, if you wish to or are forced to. If the number of bridges touching an island equals the numeral on that island, circle that numeral. If you're the first player to circle all the red-flagged islands, all the blue-flagged islands, or six connected islands of any type, you score a bonus and all other players cross off this bonus; they score only a bonus of lower value if they complete one of these goals on a later turn.

After 17 cards have been revealed and played, players then score 2 points for each circled island in addition to any bonus points. The player with the highest score wins!

To play Hashi solo, you play the same way, but you score bonuses only if you complete goals within a certain number of turns.