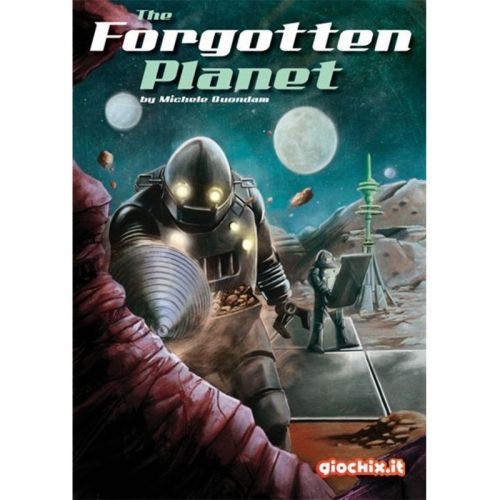 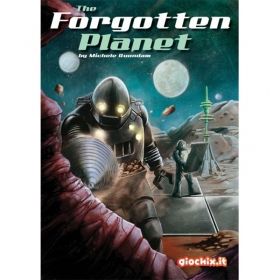 The search for energy crystals continues without respite throughout the universe! The Merchant guild is ready to pay outrageous amounts of money, and all the Seekers roam about to find them. Breaking news! The surface of the "forgotten planet" on the edge of the galaxy is full of them. In a few days, a new gold race will begin, with men replaced by robots that search, explore and fight to control the precious mineral!

The Forgotten Planet is a tile-laying management game in which tiles represent safe areas on a planetary surface on which robots walk and take other actions. These tiles also accumulate energy from the sun, then conduct it to robots, giving them (and the player) more actions if they absorb enough energy – so building and maintaining ownership of these tiles is fundamental in the game strategy. Players and robots use this energy to build new bases, discover mines, build walls to keep out other robots, push those same walls out of the way, produce more robots and much more.

If your robot falls out of contact with tiles you control, however, then it loses power and falls inactive for the round. Control of tiles is determined by the distance from a particular tile to each player's closest base; whoever is closest to the tile (with walls serving as barriers that players must "walk" around while counting distance) controls it, and the more tiles you control, the more energy you have available to you.

Thus, players need to maintain an energy connection for their robots while trying to extend their area of control on the planet's surface with their bases. They also need to control mines, of course, as that's how a player produces new resources, which are subsequently converted into new bases, sold for victory points (VPs) or converted into new robots.

The game ends when the playing area is filled with tiles or no land tiles remain in the supply. (Players can "consume metal" as one of their actions to speed along the endgame and crimp someone else's efforts to keep building.) Players then score points for the land and mines they control, with bonuses going to the player(s) with the most robots in play, the most common mines and the most bases. The player with the high score wins.