Masses of people awaiting a spectacle… scorching afternoon heat… sweaty equine bodies nervously yanking their harnesses. There it is, the starting signal!

Dashing ahead with your chariot, slowly at first, but quickly gaining speed… circling the spina in the center of the arena to complete the first lap. The next corner comes closer. Glancing back, one of the chariots is already far behind, and just ahead another chariot's speed is too high for the corner, sending the vehicle crashing into the wall and out of the race. Only a single chariot blocks your path to victory, so it's time to get uncivilized. Steadily you balance the javelin in your hand, waiting for the other charioteer to come into view…or should you just overtake him and throw caltrops in his path?

In Chariot Race, players participate as charioteers in a great race in ancient Rome. Use the dice to complete two laps on the dusty arena's circuit and be the first to steer your chariot over the finish line. On a player's turn, if they have gained enough Favors of Fortuna, they can repair their chariot. Depending on the chariot's speed on the previous turn and its current condition, the initial speed is determined, which defines how many of the five dice will be rolled during the turn. Each face of the six-sided dice allows a different action: Gain new Favors, increase or decrease speed, change lanes, or attack opponents (either directly by hurling javelins or indirectly by dropping caltrops in their path). if the first roll is not satisfactory, the player may call on Fortuna to influence the dice, as long they have her favor. Once the result is set, the player moves their chariot forward according to the final speed they achieved and may then take actions against their rivals.

However, breakneck racing and ramming are not without risk. If two chariots collide, they both take damage, and cornering at a wild gallop is not recommended. The further the safe speed is exceeded, the more damage is caused to the vehicle – which might fall apart in the middle of the arena if the driver is too careless, resulting in their elimination from the race. 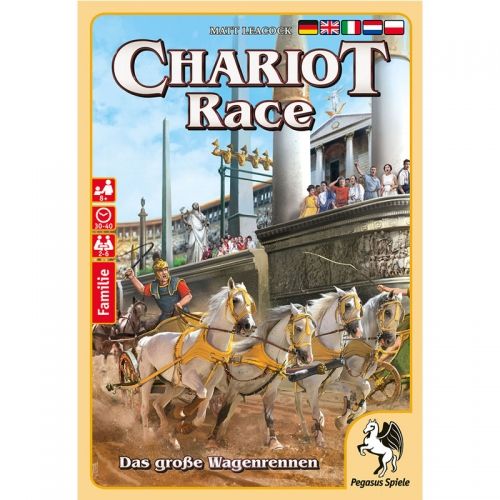 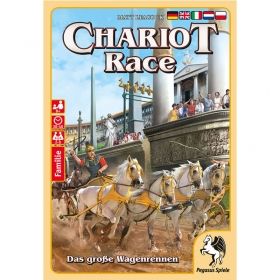 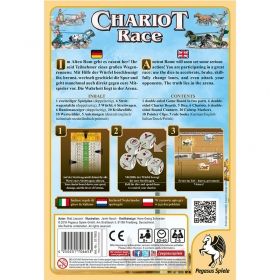