LORDS OF WAR: ELVES VERSUS LIZARDMEN

Like its predecessor Lords of War: Orcs versus Dwarves, Lords of War: Elves versus Lizardmen is a dual-deck strategic card game for two-plus players. The game sees fantasy races engage in dynamic, tactical card battles, with the armies in this set particularly focused towards cavalry and ranged combat.

During Lords of War battles, players use hands of six cards (called units) drawn from their army deck of 36 cards. A player turn starts with one card placed onto a gridded board. With the exception of ranged units, cards must be placed adjacent to an enemy unit. An elimination phase follows in which you check for the elimination of opposing cards and the one you just placed. Cards have unique formations of attack arrows on their edges and corners signifying which adjacent cards they attack once played and the damage they will do. Each card also has a defense value which when exceeded by opposing cards sees that card defeated. Once combat has been resolved, the player can then either draw a new card from his army deck or retrieve a unit from the board that has not engaged in combat during that turn. Play continues until one player has eliminated twenty units or four commanders.

The game is playable out of the box and contains two complete armies: the Elves and the Lizardmen. These factions are differentiated by their unique cards and strategies; the Elf faction is based around strong cavalry units and archers, but has a relatively weak infantry. The Lizardmen army is the most flexible Lords of War army released so far and is best used to disrupt and counter enemy attack strategies.

Elves versus Lizardmen is compatible with Orcs versus Dwarves, meaning that all the Lords of War armies can be used to battle one another. The armies can also be blended together, using a strict ranking system, to create mercenary decks for tournament play. 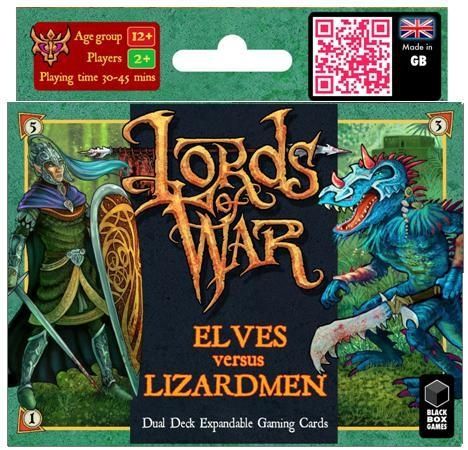 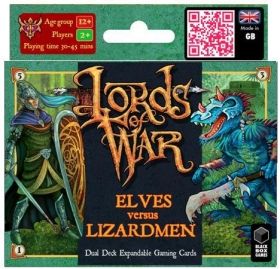