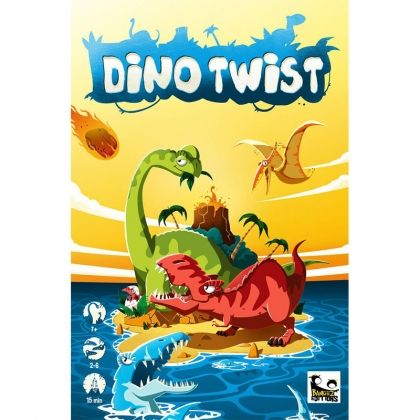 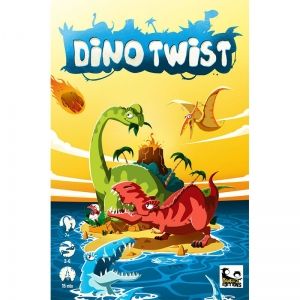 Sharp your claws and fangs, avoid disasters, meteors and gather the strongest dinosaurs!

Dino Twist is a family game of cards, fast and smart, where players will have to fight the Dinos on the island of Twist, then recover them on their islands to score the most points. But beware to the events that will spice up the battles !!!

The goal of the game is to have the strongest Dino on our island.

How to play. At the begin chose randomly 10 events on the 25, it will give a 10-15 mn game. At the beginning of each turn, you reveal a event that apply for all players (except the first turn). All players together, choose Dino from their hand, place it face down and reveal simultaneously. If you play the same Dino (same species and same strength) you can't attack the Island of Twist and you discard your Dino in the cemetery. The smaller Dino strike first, attack the Dino on the Island of Twist, and take it back to is own Island. Each species can only attack their specie. To attack a Dino, your Dino must be strongest (look at the number of strength)

At the end of the 10 events, the player with the most point on his island is the winner.

There is bonus, for the player who finish the Island first, second and third, and the player with the most Dino with big claws).

In the game, you have two different Island, one for children, initiation and one for adult more advanced game. In the advanced game you will have to respect the territories and species, whereas in the children game, you will be free to put any Dino of any species on your Island.